OLD MEMORIES..... MY EXPERIENCE IN VIETNAM 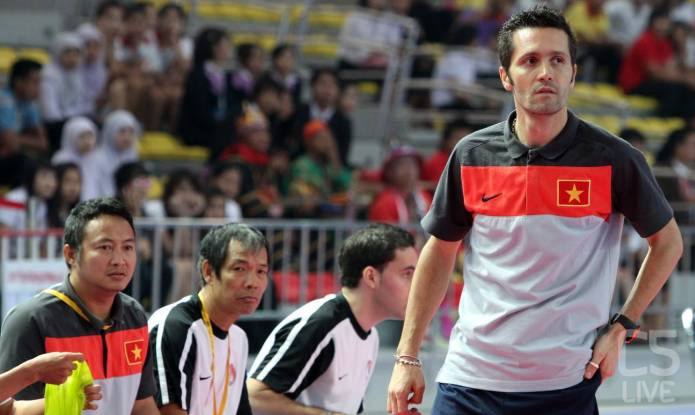 My experience as national team coach of Vietnam, started 9th of January 2010. I was working in Japan, as head coach of Tokyo Fuchu Athletic and Assistant Coach in Japanese National Team. It’s been an incredible chapter of my life which changed me as man and as coach; during the period in Vietnam I became father and reached one of the 2 dreams since I started to be a coach, beat Brazil national team.

It was  great opportunity for me  because I found myself in the same condition of a painter in front of a white canvas, free to express own ideas to create a masterpiece.

Vietnamese Federation contacted me for a challenge, qualify Vietnam for the first time in the history to the final round of Asian Cup, it was the end of December 2009, offering me a contract of 2 months.I have always been a person that likes challenges. So after a quick evaluation, talked with Fuchu’s director and Head Coach of Japanese national team, and a long discussion with my girlfriend .I packed my things and took a flight from Tokyo to Ho Chi Minh. What I knew about Vietnamese futsal: almost nothing, but I belief  myself ,hard work and good plans; Vietnamese Federation guaranteed me that for those 2 months I would have trained the players every day as in a club, to play some matches in Thailand before AFC qualification..and this was beginning of the adventure.

When I arrive for the first time at the sport center of Than Long, I was completely shocked. Coming from Japan, where there were amazing stadium, well kept and very clean.... arriving there, in this Hangar outside the sport center (that was old and dirty).the shocked became worry. The futsal court was inside a Hangar where gasoline lifter were moving box of glutamate (so you can imagine how was the air inside, the pitch was not flat, put a ball in side line, the ball rolled to center, the goals full of rust.....I started to ask myself 'where did I come'

I remember the first meeting where the translator mr. Bang, transferred my words and emotions to this group of smiling and curious faces of the national team players.

The first training was also a surprise: the complete caos, where players where not use to any kind respect in terms of line, queue and keep order during exercise..it seemed a mirror of the Chaotic traffic of the city center of Ho Chi Minh. Organize, organize and discipline were the first targets.

I am not the kind of person to surrender easy, we started to work harder, try to empower the players, because at the end, they are always the main actors of the show. ( I DON’T KNOW ANY COACH WHO SCORES A GOAL OR SAVES A PENALTY; our ability is to transfer good information to them, to persuade them ) I started to tell them that we were working hard to do something hystoric, that never was reached before in the country. I fully believed we could reach but this required lots of effort and dedication. They started to believe and everything became smooth: hard work, positive athmosphere, lots of sweat, big dreams

The first match in Thailand was a positive surprise, we won 6-5 vs Thai Under 23 national team, the players and the Leader of Federation mr. Tu were excited, for the first time a success vs. Thailand. We played other 3 matches and then transfer to Jakarta for the qualification

We played in the group against Cambodia, Philippines and Malaysia. In The first game vs. Cambodia, I was very nervous, representing a country as head coach, so big responsibility and honor, I have to say that during the Anthem my legs were shaking. It was an easy match and great victory as the second one against Philippines (which played a strange futsal with always a player who did not run back in defense, allowing a 4v3, but ready in attack to receive a direct ball from keeper). Then the last match against Malaysia, who beaten Vietnam just 3 months before for 8-3 in AFF cup (the cup of south east Asia) played in Vietnam.  Both teams were already qualified for semifinal so we leaded first ½ 2-0, and then game finished 2-2 because in second part I tried to save my best player. In the other group: the host Indonesia of Robbi Hartono (a team full of Talents) and the expert Australia of Giovenali Brothers and many good players. The semifinal with Australia was a great match, and we lost for un-experience and many chances missed in front of keepers, but my 'Vietkong' played and excellent match. Then in the final for last place available against Malaysia again, we were leading 1-0, then 2-1 and then down 3-2; and my players were so nervous. With 5v4 we draw at 37' from end. Extra time, we scored 3 goals more and we qualified for AFC Final round for first time in Vietnam history, in Uzbekistan the following May. I remember after the game, I talked with Hoang Giang, the guy who scorde the 3-3 with power player, he told me 'coach, I am the first player in the history of Vietnam futsal who scored a goal in 5v4 with national team, till today, every time we tried 5v4 we received extra goals'  it was the beginning of a magic atmosphere that accompanied me for 4 years. Came back to Vietnam I renewed for 4 years. We went 2 weeks in Spain, in Segovia to prepare the Asian cup, it was snow in Segovia, the players as you can imagine were not rich and also used to tropical weather. Someone came with summer clothes and slippers only.. and a player became sick of Pneumonia. In the Asian cup we started with a victory vs, Korea and then a lost in a very very unlucky game vs. Kirghizstan, ..and no Chances vs. Thailand but for first participation we almost reached the quarter final.

At that time there was no league in Vietnam, just a 2 weeks tournament, so I kept players of national team training with me all year, like in a club, playing 30/35 international matches (between official and unofficial) every year, for the first 2 years.

I worked to increase the number of competitions, create more teams, improve the condition of players in clubs and make the league longer.

At the same time we started to work to develop the futsal national  youth training centers.

The first center was created in Ho Chi Minh, we selected 20 kids under 16 y.o. and 20 under 18 y.o., who started to live and study together and training futsal every day, with a salary for the familes.  I made all the plan and the coach was a national team player who retired at the end of the year. During my other 3 years we created other 2 centers one in Buo Men Tout (center of Vietnam) and one in Hanoi, started from under 12 till u.18, creating a tank of players who competed in the league (league created after my second year - 2011) from under 16. Till now the system is the same and every year Vietnam produces 60 professional selected player who played and trained futsal professionally since the age of 11. If we compare to China, we can understand the difference in developing.  This is the real treasure of Vietnam, the treasure who brought a country where futsal was unknown in 2010 (I still remember people who asked me, 'what’s your job?  and at my answer coach of the futsal national team; they looked at me with strange face asking: 'what is that') to become the most practiced sport in the south of Vietnam, and with a national team who took part to last 2 editions of world cup arriving to 1/8 finals, and with a very good professional competitive league.

Let’s go a little bit back. In September 2010 I became father and in January 2011 I married. In 2011 we got 2 second position, at SEA Games and AFF cup both times loosing Final against Thailand. In 2 year we became power number 2 in south  east Asia, we reduced the gap with Thailand, we made futsal popular and professional in Vietnam and I refused and very good offer from Uzbekistan to continue to lead Vietnam.

In 2012..my worst year, we lost the qualification to AFC final round in a desperate match again Australia. After a very good group stage, finished in first position, drawing against Australia who score the 2-2 at 12 seconds to the end, we lost the semifinal vs. Indonesia at extra time 1-0 after a match completely dominated and in the final of 3rd place.. The fear against Australia again, blocked us and after an horrible 1st half the game finished 5-4 for Aussies. The qualification was badly prepared because scheduled at beginning of 2012 just after Lunar New Year, where players and Federation preferred to have holidays underevaluating the difficulty of competition. But that competition gave  us the awareness of the explosive growth that happened in the second part of 2012 and 2013.

The new stadium included, gym, meeting room, players rooms, my office with window over the pitch, the canteen where we could control the diet of players and lots of dormitory (military style with 6 beds each room).

I planned the sport center in a way to play there a full league which we started to play from 2012. All teams met in Ho chi Minh (live in dormitories and eat in the canteen of stadium) and the league was played in 4 rounds of a month where every week a team played 3 matches.

To develop futsal then I suggested since 2010 to organize 1 or 2 camps abroad every year and a 4 nations tournament in Vietnam to develop the 'futsal Culture'.

The first year was played in Hanoi, I was so sad that very few people attended the matches

As they didn’t care about their national team

Qatar, Chinese Taipei, a selection of Thailand and Vietnam. Champion, we could not start better

China, Qatar and Uzbekistan. Won against China, lost 1-0 with Qatar and 3-2 with Uzbekistan

From 2012 the tournament moved to Ho Chi Minh. Boom of people because of the popularity we reached, better tournament and better opponents.

Italy, Kuwait and Uzbekistan. Won against Uzbekistan and Kuwait on 2 amazing matches supported by Vietnamese fans and lost 8-0 against Italy, vs players who my Vietcong were used to see on Youtube or on my didactical videos (this was october 2012)

In June 2013 we went to make a camp in Italy to prepare AFF cup. We played 2 matches against Italy, in the first one we lost 4-3 and in the second one we draw 1-1 we started to be aware of the great our potential and the first 2 players of the academy made their debut to national team.

2013 was my last year in Vietnam: we won other 2 silver medal one at Sea Games and one At AFF cup,  both finals  lost again vs. Thailand but with minim difference and in the last year tournament in Vietnam we won against Brazil for 3-2 in an Historic match, consider that Vietnam is still today the only Asian country who have beaten Brazil in an official match, in front of more than 4000 people who paid ticket

When I started, Vietnam was at position 83 of Fifa Ranking and when I left we reached the 38 an amazing growth and big honor to have been part of that