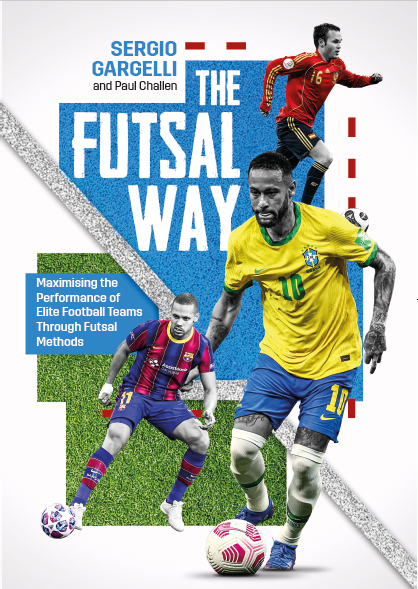 Maximising the Performance of Elite Football Teams Through Futsal Methods

By Paul Challen and Sergio Gargelli

Success in elite football demands both mental and physical excellence. Players must make decisions at lightning speed, and execute those decisions with perfect technique, combined with an ultra-clear understanding of where others – their team-mates and their opponents – are at all times.

In The Futsal Way, world-renowned futsal coach Sergio Gargelli and veteran writer Paul Challen make the case that today's elite football clubs require futsal coaches on their staff to take their teams to the next level – as many have already done. With photos, diagrams and clear explanations, they demonstrate how top-level coaches can use futsal to produce exceptional players in the 11-a-side game, as seen in the amazing technical ability of many Brazilian and Spanish players who grew up playing futsal. This book is a must for any team or coach looking to keep pace with modern training techniques and tactical developments. It combines in-depth instruction with real-life examples.

The Futsal Way is an in-depth look at how elite football coaches can leverage futsal training, tactics and technical elements to boost the performance of their players and teams. World-renowned futsal coach Sergio Gargelli, who has led top international sides around the world, uses detailed explanations and precision diagrams to explain how coaches can:


Sergio Gargelli is a world-renowned expert in the futsal-to-football methodology, having coached the national teams of China, Norway, Vietnam, Japan and others. He delivers seminars for coaches and players around the world via his company, Futsal Solutions. Paul Challen is an author from Canada. He has written more than 60 books for adults and children on a wide range of non-fiction subjects including sport, biography, history and science.